JLS has a legacy of successful implementation of advanced motion control technology in many industrial applications that require precision and reliability. Our introduction to the world of packaging automation dates back to 1993, when we were contracted by food processors to retrofit and upgrade their existing automation machines and systems.

JL Souser was established in 1954 by Joseph L. Souser and his wife, Polly. The business' roots were as a manufacturers' representative firm, handling power transmission equipment while covering the Middle Atlantic States. Upon the death of Joe Souser in 1976, Polly took the helm and thus J.L. Souser & Associates, Inc. (JLS) became incorporated in 1978. 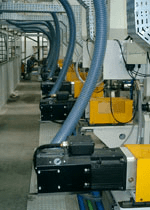 Shortly after JLS' official inception, Joe and Polly's son, Craig Souser, a 1980 alumnus of Lehigh University, assumed sales responsibility for the company. With an emphasis in the developing technology of electronic controls for AC motors, the company's focus began to change and employees outside the family were added.

A season of transition brought JLS to expand its product range to include variable frequency drives and built a significant following for providing application engineering assistance in the implementation of new drive technologies. JLS recognized the importance of the servomotor to the automation machines field, and after several years of limited success with various manufacturers of motion control equipment, became a representative of Indramat in 1987. Working with motional control global leader, Indramat, JLS now garnered a reputation as a leading source for high performance motion control systems.

In 1991, with the addition of Don Heistand to the company, JLS endeavored to provide systems engineering and shortly thereafter turnkey engineered systems for a few of its key customers. This led to the subsequent field service offering which JLS implemented to support its engineered systems. During this time, the company relocated from its 458 West Market Street location to 402 Wheatfield Street, in order to stage products and equipment for its growing engineered automation machines systems.

Having outgrown the 402 Wheatfield facilities in 1994, the company relocated to 1285 East Princess Street and now boasted 10 employees. In this season of growth, an engineering department and computer network were annexed. 1995 saw sustained growth in its commitment to Star Linear Systems and its generally high output in its Engineered Systems business sector. In 1996, the concept of JLS Robotics was introduced to aid in both the sale of JLS products and the growing opportunities for Custom Gantry Robots.

Until 2005, the company functioned as a manufacturers' representative, distributor, and integrator for the principals for which it is affiliated. During that period, JLS offered electrical and mechanical software engineering, field service, training, panel fabrication, cable assembly, and mechanical assembly. JLS has manned its current facility since the fall of 1998, specifically purposed to provide for the trending expansion in systems integration for both printing and robots.

At present, JLS is focused its energy in primary and secondary packaging systems. The company has transitioned from a sales channel for other motion control products to being a provider of solutions for selected markets. Core competencies of JLS include end of tooling, robotics and vision, as well as product handling.

The most important asset of JLS is our people. We help our employees realize their dreams by providing for balanced living and supporting personal development. We value loyalty and strive to grow our organization from within.

Our decisions are based on our knowledge of the facts and our commitment to do the right thing. We live by our commitments. The ultimate measurement of our integrity is our reputation.

We honor our customers', principal's, and associates' need for confidentiality. We value long term relationships based on mutual respect and belief in shared success.

We all are personally accountable for our corporate performance. We act as owners, striving for continuous improvement of our business processes and personal effectiveness.

Each of us will serve others with an attitude of humility, working toward common goals.

We aggressively pursue our mission to be the best at what we do, adhering to our core values and principles. Our work ethic compels us to do whatever it takes to achieve the desired results.